This document is a brief comparison of the bedding and nesting habits of the Great Apes and the fabled Australian Ape.  It is our contention, and one that seems to be growing, that as yet undiscovered Australian Yowie (like the Sasquatch) is simply and undiscovered ape rather than undiscovered type of pre human.

When we began our investigation in river laden national park on ’s Sunshine coast, we began with this hypothesis that we are dealing with an undiscovered great ape. The first item that alerted us to this fact was not the human looking footprints we found and nor was it any other report or witness statements but rather the first grass bed we found in April 2012. I conducted a comparison between this and great apes and found startling similarities between the two, not the same; they simply shared some common traits such as tea cup formations, grass spirals and completely depressed vegetation

This subject, as a starting point of comparison given the lack of data on other areas of comparison being foot prints, habits, diets, hunting or family structures will demonstrate a clear association or ‘possible instinctual association’ between the comparable subjects. Through the assistance of a local academic institutions we where able to rule out known mainstream animals having created these ‘nests’ or ‘beds’ such as Kangaroo’s and Wild Pigs. The only Kangaroo capable of some of these beds are not contained with this area. The species in question is a Red Kangaroo which can reach heights of up to 8 feet in some instances.

The images of nests of various great apes such as Westerns, Lowland and Highland Gorillas; this includes the Silverback species, Orangutan and Chimpanzee. Images of suspected Australian Ape taken April to December. Gorilla photos are courtesy of Google searches. In this exorcise, we are not looking to identify the species obviously as they are different. What we are looking for is ‘convergent behavior’ or ‘similar or to posses ape like qualities’ in their presentation and if this link can be established it may guide us to other ‘Ape-like’ qualities and bring us closer to solving this puzzle.

Assuming these ‘unknown creatures’ are real for the uninitiated, our research team has had numerous encounters with them which include vocalizations, intimidation like behavior such as rock throwing and sensory awareness such as smells of rotting flesh and pungent urine. This also includes some photographic evidence all contained with other reports.

Our research team has dubbed this family unit we are dealing with as ‘River Apes’ given this name as these creatures live on the banks of a river system within a National Park and State Forest. We believe their adaptations to river life and the naturally variable diet compared to those Yowies that live in the mountains regions of . In my view it would be similar in relationship and difference to or Mountain Gorillas and Cross River Gorillas, similar and same in the main but have different nuances and ways of life given their local environment.

In the later part of this post, I have simply inserted pages from the hard copy of our report on this subject in the interests of time 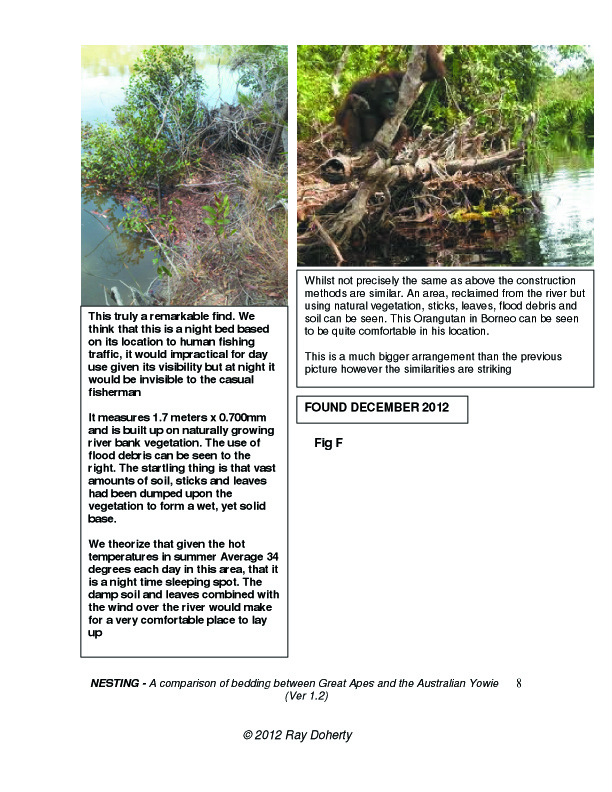 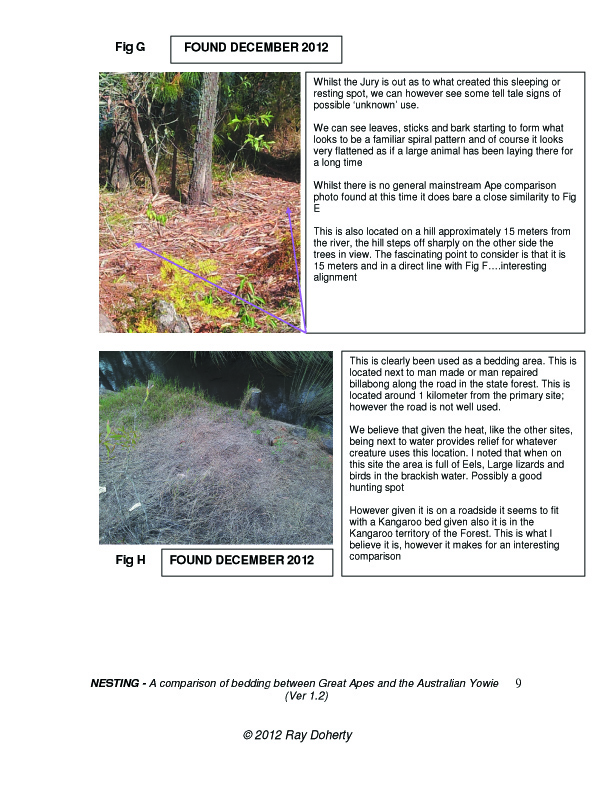 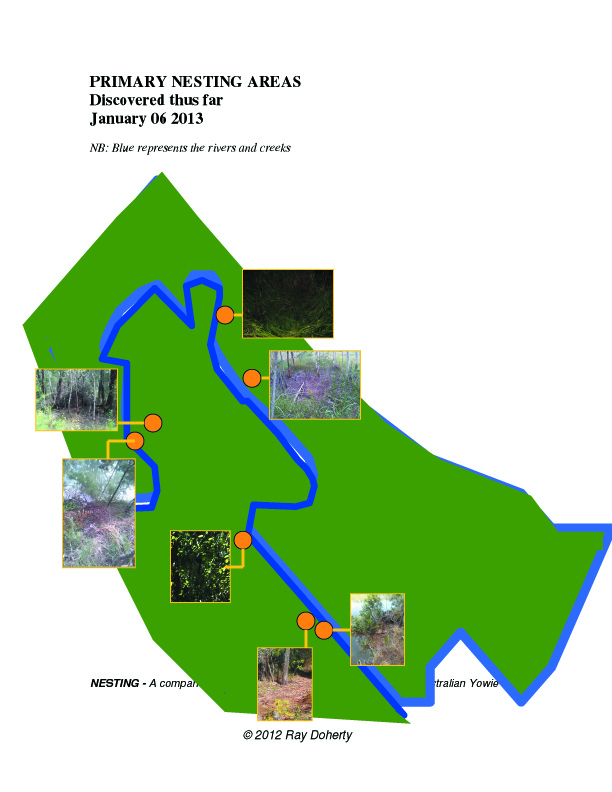 Whilst at this time it is impossible to confirm the existence of Yowies, let alone their possible relationship to that of ‘Great Apes’, it is noteworthy that based on expert Australian Wildlife experts that no other known animal makes nest of this nature or design in Australia

Furthermore, it is difficult to imagine an animal alive in Australia (other than a wild Boar) big enough to make these nests and provide the required weight in the growth suppression and flattening apparent in the nest is highly unlikely

In figure E it is noteworthy that this is exact spot that the creature was sitting in when we had the rocks thrown in our direction, he ran from this position showing us his back, shortly there after we recorded the voalisation. We contend that this was his day lounging spot, sitting under the dense, cool shaded cover blissfully passing time until we stumbled upon him. We got within 15 meters of this location before the rocks where thrown.

Whilst we cannot definitively make any link whatsoever between Great Ape and the Australia, further, to their existence, what is clear and apparent  is that the direct link of Primate or Ape- like behavior in this forest and that the precedent for these structures and their use is well documented in Natural science. This briefing paper is not saying that if the Yowie exits it is an Ape, but rather we are saying Ape like qualities are present and this course of investigation may continue to provide these interesting results

We have had several of these beds confirmed by other witnesses in other parts of the country who have observed these creatures in similar structures, we are able to validate those reports and cross reference with what we had found. Through this now confirmed understanding, we are closer to being able to follow the signs of some of thier behavior more closely. The simmilarities to the nesting / bedding habits of other great apes is startling and certainly not a coincidence. There is not one animal in the Australian wildlife landscape that can make beds of this size. Smaller, yes, and similar but not to the same dimensions of diameters and depth.

Posted by The Australian Yowie Project at 05:35